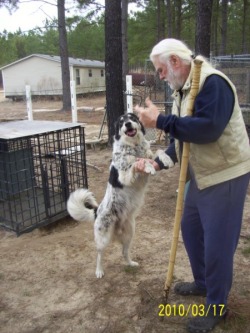 Carolina dogs are a rare, prized, and ancient breed dating back thousands of years. Please take a look around the site for detailed photos of my dogs, a detailed description of characteristics, and the rich history surrounding these unique animals.

Although Carolina dogs still exist in the wild here in South Carolina, human encroachment is threatening to make that a thing of the past.  It is my hope that through education and breeding that the Carolina dog will continue to thrive, whether in the wild or in your home.  If you are interested in a Carolina dog for hunting, breeding, or companionship, please see my detailed contact information below. Links to relevant sites containing information on the Carolina dog are provided on the characteristics page of this site.  When you purchase a Carolina dog, you own a piece of history.
-Dr. Don Anderson
owner/breeder/developer
​ 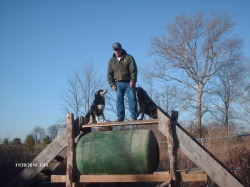 Mark Eden in Greensburg, Indiana has been assisting me in breeding black & black and tan Carolina Dogs using his Mingo, the grandson of my very first Carolina Dog Tadpole, as a starting point. I sent two of my piebald females north to Mark and Mingo to hopefully birth a few new black additions to the Lynches River Carolina Dog family. That was over a decade ago, since then Mark has raised and placed several UKC litters, in addition he has become a trusted family friend and Lynches River Carolina Dog partner

Mark also has a large interest in the history of the Carolina Dog and is an avid researcher on the subject. Specifically, he has done some interesting research on some of the very earliest accounts of Carolina Dog encounters and observations. Some of the information Mark has found is listed below.

In Colonial Virginia, North Carolina, South Carolina, Georgia, Florida, and Alabama what we believe to be Carolina Dogs are documented in the travels and observations of William Bartram. Bartram was a very widely noted naturalist and explorer of the 1700’s.

As quoted by the AKC: “As of 1539 (240 years before Bartram), when de Soto's expedition landed in Florida and began their odyssey throughout the Southeastern U.S., there was only one species of domestic animal in North America, the native Indian's dog. This dog was described by members of de Soto's expedition as looking exactly like the wolf except that it barked and the wolf only howled.”

Lewis and Clark in the early 1800’s said the dogs of the Indians west of the Mississippi were "party colors" . The Expedition also noted that the Indian Dogs west of the Rockies had shorter coats.

The basic observations from Mark Eden's research have lead us to believe that in the southeastern area of America Indians were the owners of the wild and domestic dogs that what we now call Carolina Dogs, and most were noted as being black, black and tan, or pied. Although It is impossible to deny the ginger color that is so prevalent today in the breed is noted that along the Lynches River water shed; black, black and tan, and ginger colored Carolina Dogs prevail in order as noted.

I got my first LRCD in 2000 and It has been nearly a decade now since I joined Don as partner in his/our Lynches River Carolina Dogs quest. Don's old dog Maynard and my Mingo have passed on since Don welcomed me but I still have their first generation females. When my old Mingo died I wasn't sure if I wanted to breed for any more pups but I was lucky enough with the help of Don and Dr. Brisbin to get a wonderful free ranging/ wild caught ginger male Carolina Dog from near Don's properties to carry on my exclusive to the Lynches River area Bloodline. We are very proud of the litters we are having with my now well known sire Swamp Fox Bishop. See more pictures on our face book site.  Mark Eden